This is the first of a three part series about One World Project’s passion to protect wildlife by promoting alternatives to ivory like tagua.

The majestic elephant is a symbol of the incredible wildlife found in Central Africa and Southern Asia. Elephants are the largest land mammals and are considered to be among the most intelligent creatures in the animal kingdom. Like humans, elephants are social creatures. According to research, elephants are able to show a range of human-like emotions such as sadness and altruism, as well as self-awareness. It seems with so many common traits, elephants would receive their due reverence from people. Unfortunately that hasn’t always been the case. In fact, over the last 40 years African Elephant populations have dwindled to below half their normal numbers as a result of human activity. The African Elephant has been an endangered species since 1990, while the Asian Elephant has been endangered since 1975.

What factors are fueling the merciless crimes against these magnificent creatures?

Both African and Asian Elephants are highly prized for their 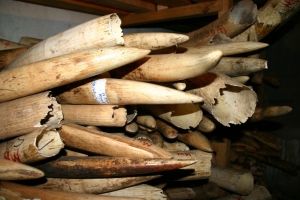 tusks. The tusks are used to make ivory, a white material used since antiquity to make art, decorative objects, as well as certain religious articles. According to CITES, an international agreement aiming to protect wildlife, the harvest and sale of ivory violates international law. Several countries in Africa are working to combat the slaughter of elephants for their tusks. Yet as long as there is still a demand for ivory, Elephant poaching is likely to continue. Sadly, the black market for elephant tusks is still alive. There is a high demand for ivory goods in countries like China, where ivory has traditionally held cultural significance. The high demand for elephant tusk has persisted, making ivory a lucrative industry for poachers.

What can we do to help?

Even in the midst of all the atrocities against nature, humans are not powerless. Supporting a complete ban on Ivory under CITES is a good start, but as long as there is a demand for ivory in the world, elephants will still be in danger of going extinct.  We hope that together as environmentally conscious individuals, we can unite to help the dwindling elephant population. One way to help conservation efforts is to find sustainable alternatives to ivory, such as tagua. Another way you can help is by spreading the word. Consider sharing this blog with your friends and family so we can work together to raise awareness about the demand for ivory and the effects of elephant poaching.

Please check back soon to the One World Projects blog for the second part in this series to learn more about tagua.

Error: Twitter did not respond. Please wait a few minutes and refresh this page.